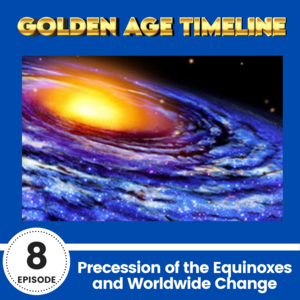 Here are 11 signs that we are going through an unprecedented change both personally and globally. The Precession of the Equinoxes also relates to the theory that the earth is going through the photon belt, which is an area of the galaxy that is higher vibrational and what will trigger ascension of the Earth to move from 3rd density to 5th.

The notion of The Precession of the Equinoxes features in the novel, Helio Tropez. And although it is a work of fiction, the theories in the book, are based on evidence of something we’re all going through right now. Being aware of that can help you better navigate this massive change.

1 Minute Habits that Can Change Your Life Forever [Blog Post]

Below is a machine-generated transcript and therefore the transcript may contain errors.

Here are 11 signs that we are going through unprecedented change both personally and globally. In the novel, Helio Tropez, there is the notion of The Precession of the Equinoxes and how it heralds a massive change worldwide and to all of humanity. The Precession of the Equinoxes also relates to the theory that the earth is going through something called the photon belt, which is an area of the galaxy that is higher vibrational and what will trigger ascension of the Earth to move from 3rd density to 5th. Although Helio Tropez is a work of fiction, the theories in the book, are based on evidence of something we’re all going through right now. Being aware of that can help you better navigate this massive change.

What is the precession of the equinoxes?

The theory is that the earth has been in an inverted 3rd density state for a long time, where the experience is heavy, controlling and dense. The earth rotates around the sun every 365 days and the sun make a revolution around a Central Sun, approximately every 25,000 years.

We think of equinoxes as two days in the year in Spring and Autumn where the sun rises exactly over the equator. When this happens, it creates the same length day all over the planet. Throughout history, it provided a way for ancient people to mark the change of the seasons from longer or shorter days. That’s all shifting. That’s because it’s a cyclical event…a long one.

The poles have shifted their axis several times throughout the Earth’s history. For example, about 15 000 years ago the pole star of the earth used to point to Vega instead of Polaris where it points now – also known as the North Star. The slow movement of these stars is the precession of the equinoxes, which takes about 25,000 years.

So, in 2012 the Earth passed the Precession of the Equinox which heralded in the new cycle that’s been prophesized in many spiritual and religious traditions throughout history whether you call it moving from The Age of Pisces to the Age of Aquarius, or out of the Kali Yuga, or the Hopi or Tibetan prophecies, we are leaving one reality and starting into a completely different reality. It might likened to ending a game of Catan, and resetting and entirely different board.

So, some say we just left the 2000 year long Age of Pisces in 2012 which was about control and oppression or a low frequency reality. In contrast The Age of Aquarius is harkened in by moving through the Photon Belt. So, this means all controlling structures will implode and be unable to sustain in the next reality.

There are theories that streams of sound frequency are being spread through ancient structures, sacred sites, pyramids and leylines throughout the planet. And the notion that a hidden artificial intelligence has been streaming low vibrational frequency through these sites all to keep humanity buzzing at a very low vibration so they are much easier to control. But, that control is falling away hence the intense chaos that is happening.

For example, in terraforming a planet, an advanced race might choose pairs of energy points, such as crystal caves located underneath the Earth. They were placed as time capsules lying dormant until this time in history when the inversion is ending, and they are now activating, and spreading new and higher frequencies.

When activated these higher frequencies do dissolve the fear-based energy that have been emitted by the old inverted systems. It’s the idea that souls play out a process of moving from unity and light to duality and dark and back again, or as the characters say in the novel from SANA to SIM and back again. So ultimately, everything evolves back to light and unity, or back to a high frequency so that’s what’s happening when we passed the Precession of the Equinox and entered the Photon Belt.

So, once the fear-based energies dissolve way, so too does war, suffering, poverty, struggle, bitter conflict, depression, disease…all of these are symptoms of an inverted reality. So, in 2012, the solar system began entering the Photon Belt. As the Earth passed through this belt of photons, it started the movement from homo sapien to homo luminous. Some have said Photon Belt represents a temporary window for spiritual transition during which time the earth and all its inhabitants move to a higher density level.

Other theories refer to the Photon Belt as part of the rings of a Central Sun that our galaxy rotates around, and these rings are made of “radiation” caused by the “splitting of the electron.” Photon energy is a powerful new energy source that will replace electricity in the new era. It’s a free energy source that cannot be monopolized. Its outer edge or belt has already reached Earth’s atmosphere and is affecting not only Earth but many planets in the solar system…changing the climate, the frequencies, the culture, the memories, and even the abilities of all inhabitants.

Photon energy is light energy, and it permeates the Earth in waves. It has the power to extend human life because it realigns the human body into a lightbody. Photon energy vibrates at a very high frequency and confers the power of instant manifestation of thought. It can help people have clarity and purity of thought, being more in the “now,” and being more heart-centered, compassionate and loving.

Another way of looking at it, as in the novel, Helio tropez, 3D earth is reaching a point in the galactic cycle whereby a large number of souls are again ready for graduation. Or they refer to it as a harvest of souls. The last time this cycle happened was about 25,000 years ago. Evolution happens through interconnectedness of human consciousness working together. 3D humans and their 4D helpers are approaching final exam. That’s when the life lessons get more intense. They must break free of all enslavement individually and collectively in order to evolve and ascend to the next density levels.

So, it’s not only 3D humans that are affected, but all the densities above like 4D, 5D, 6D and beyond. Many groups, races, beings on many densities are all facing a huge evolution…the core of which stems from this movement from 3D inverted or artificial to 5D non-inverted or organic.

Here are 11 signs or ways people experience this shift from one density to another.  You may recognize some of these going on in your life.

If you have ever gone scuba diving there are some similarities. It’s a world where everything is different and it’s like you go under and then come back up to the surface, then go back again. So there is a constant need to adjust.

If any of these signs and symptoms are familiar to you, it’s okay. It’s just a process and I do believe there is lots of unseen support to help humanity and the entire Earth through this birthing into a new era, a new timeline, a new density, a new dimension. Of course what makes it easier is quiet time doing things you love, being out in nature, journaling your thoughts, meditating, reflecting, being kind to yourself, strengthening your relationship to LIFE, to some kind of benevolent divine guidance, whatever that is for you… People who can do that seem to be faring a lot better than people who don’t do that. If it’s new to you, just remember a time in your life when you felt like LIFE with a capital L was on your side, where you felt supported, guided, where you had insights that help to solve a problem. We’ve all had them. Even if they only come a few times in life, it’s part of the human journey. Go back to one of those times and relive it, remember what was happening, how you felt, what you experienced.

For example, I remember a particularly tough time as a teenager, about 15, where everything just seemed hard, dark, uncomfortable, as often happens when you are a teenager. But in my life all I saw was parents not getting along, body changes that were uncomfortable, school being hard and boring and friends being unkind to each other, and long dreary rainy days. It’s often in those dark times in our life when we do reach out to something, anything, to help. So I did in that moment. I wasn’t raised religious in any way. I was never taught that there was some kind of divine force I could reach out to, but I did in that moment, and something definitely showed up. I remember going from this feeling of dark density, to a feeling of lightness, feeling of being nurtured, protected, almost a sense of bliss. And it stuck with me for many days. Everything in the world look different. And anytime I’m in that hard place again, I just go back to how I shifted from one to the other at that time as a teenager, and other times are up my life. And it’s almost like the memory, reliving that memory, helps me do it again. It’s like loading the software into my mind for doing it again. So give that a try, and just remember to stay grounded. Exercise, being outdoors when you can, breathing, taking moments of being present.

In the show notes you’ll see a link to a blog post I wrote called – one minute habits that can change your life forever…to give you three very easy, quick, and powerful ways to stay grounded. Try them a few times, and see how they work for you. Try them three times a day, morning, midday and night and then they will become default habits that you can just call on whenever you need.

So that’s it for today, if you’d like to get a copy of the novel Helio Tropez, you can find it on Amazon, or look in the show notes for the link. And you can also check out that blog post by looking in the show notes. Thanks for listening and we’ll see you next time.

1 Minute Habits that Can Change Your Life Forever [blog post]

1 Minute Habits that Can Change Your Life Forever

So, you’ll see in the show notes a link for getting Helio Tropez on Amazon. Or, just go to GoldenAgeTimeline.com/book.  That’s it for today, I hope it was useful. Do like, share and subscribe if you haven’t already done so.

Previous Post Ep. 7 – The Difference Between Densities and Dimensions Next Post Ep. 9 – The Stories You Tell Yourself